Google Marketing Live, organized by Google, is by far the most important annual event of the digital marketing scene, with the participation of 5000 professionals from 68 countries. 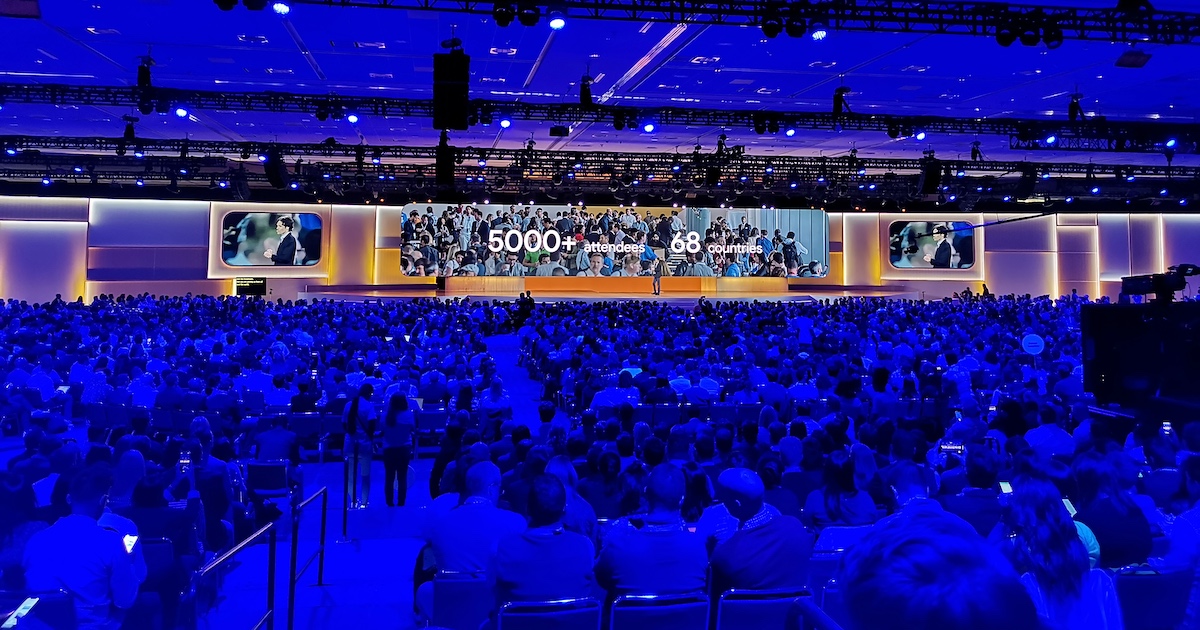 Talking about Google, we can only express ourselves in billions. Gmail is used by 1.5 billion users monthly, and Android is running on more than 2 billion devices, making it the most widely used operating system in the world. And the story stretches further with Google Maps, Google Drive or the Chrome browser opened by billions every day.

Reports tell that 2.5 billion individuals updated their personal data in their Google accounts in 2018, indicating a minimum of this much active users.

And there is one number that still exceeds this volume: Google’s revenue, reaching 136 billion U.S. dollars, a 26 billion step forward from the last fiscal year. YouTube, originally acquired for 1.65 billion dollars, is now estimated to worth 160 billion. But how does a company achieve such high numbers, what factors maintain the growth, how can it constantly renew itself and its achievements?

This report about the Google Marketing Live 2019 conference in San Francisco comes from Krisztián Dunder, the co-founder and CEO of the CEE-focused digital marketing agency, Growww Digital.

If we were to describe what is Google, a market leading search giant and technology firm,  working on, we could do that with three keywords: innovation, machine learning, and automation. More than a trillion searches are made in Google’s browser yearly, half of it coming from mobile devices, with Google assistant earning a steady 1 billion user base. Working with, connecting, and converting this much of data into commercial value not only favors but even requires the usage of machine learning.

Two years ago, Google’s machine learning solution was not able to make a difference between a cat and a dog. As of today, it does not only recognize the dog but specifies the breed and instantly collects additional information from available data, enhancing the experience of the user looking for the specific breed.

Smart reply, a function of Gmail, is used by a mere 10% of the users. Smart reply answers are very short answer alternatives, about 3-4, created by machine learning, and can be seen at the end of emails. In a lot of scenarios, a reply to a message could be composed with a click of a button, the replies being composed automatically by a machine learning algorithm based on common examples (like thank you, understood, etc.). A user base of 150 million indicates that machine learning can speed up, or make giving an answer more effective, to this many people.

Google’s brand new products and solutions for advertisers and agencies

The first day of the conference was packed with new product launches. Even though most of these concern the advertising system, it is important to understand what Googe has in mind, and which of them should be prepared for, as most of these new solutions will be available on the Hungarian/CEE market very soon.

The Gallery Ads forms of advertisement will be displayed on the top of the search results page. It gives the opportunity to introduce a holistic brand in a format with 4-8 pictures, a 70-character-long tagline and 3 headlines. Google’s measurement data shows that this form of advertisement led to a 25% increase in the number of interactions (swipes, paid clicks) compared to earlier versions.

App deep linking gives an answer to one of the most problematic aspects in connection with mobile devices: identifying the customers arriving from mobile applications. Turning the Deep linking function Google ads (and the usage of Google Analytics for Firebase KIT) enables the tracking of transactions from mobile applications. In other words, it is finally possible to link to products found in mobile applications or other landing pages directly from Google ads. Google claims that conversion rate doubled, but the example of one of the biggest Brazilian online retailer, MAGALU’s example is also reassuring: the efficiency of tracking transactions within apps has risen by 110%.

The most spectacular change is the renewal of YouTube bumper ads – the 6 second long, NON-SKIPPABLE pre-roll ad of YouTube. The novelty is called Bumper Machine, which builds content from a 90-second video uploaded to YouTube: it creates 3-4 different, 6-second long video ads with the help of machine learning. Although this new solution sounds very promising, creating video content is still a hurdle to many, and the demo presented with GrubHub at the conference wasn’t extremely convincing.

Custom Audiences is some serious gourmet topping for hardcore PPC experts and data fetishists but covers really important new technicalities. The core feature enables you to create all-in-one combined audiences, and use these audiences in Google, Gmail, and YouTube campaigns. With the help of the newly introduced Audience expansion tool (which looks rather like a copycat of Facebook Lookalike Audience) the conversion rate in display campaigns gained a 50% increase according to Google’s own figures.

Discovery Ads is based on the behavioral pattern that 3 out of 4 buyers would be willing to try something new while being in the buying process, and 85% of them meets the decision within 24 hours. Advertisers will display the products on a swipeable surface, in a carousel. This feature bears a lot of potential because advertisers are able display further products and offers when users are the most open towards new information and inspiration. The overall reach is expected to increase remarkably, as Discovery Ads will be displayed on YouTube, on the Gmail promotions page,  and on Google’s Discover feed among others.

Shopping wasn’t left out from the flow of new features either: the first day was packed with launches that made to the wide public.

In the last two years, the Shopping-related searches for products available nearby have tripled. In the very near future, Google Shopping ads will not only lead to websites, but products will be available from local stores and some retailers as well, with Google providing warranty for orders from these retailers. This feature is already available in France in a test phase and is coming to the U.S. in a couple of months.

It will also be possible to place orders through Google Assistant and for products from YouTube ads too (this was widely cheered by the audience).

Oliver Heckmann, the Vice President of Engineering from the Department of Shopping and Travel also talked about Showcase Shopping Ads in both the public and NDA sessions. This form of advertisement will be available within a month in Google Images, YouTube, and Discovery Ads. Estée Lauder experienced a 70% increase in CTR while testing the new function with Google.

The hardcore newnesses came later in the NDA sessions, as always, but as NDA information is not to be published, we cannot share anything else about it yet.

Local campaigns, introduced last year, is also up for new features. Using local campaigns through Google Ads brought about a 4 times increase in the number of Dunkin’s monthly visitors. The new way of development is spreading some of the features to new areas: search results will include relevant places, and it will be possible to appear as promoted pins.

Summing up these 2 and a half days, it can be said that this was the biggest, most well-organized event ever served by Google here, in San Francisco. The icing on the cake was the night concert of Katy Perry, where no place was left empty. Not only the evening events were outstanding, but the sessions throughout the day as well: apart from Google’ own talks, many well-known brands participated, such as Levi’s, Pepsi and Volkswagen. After taking in all that information, we could dive into the world of artificial intelligence and VR software with the help of product sandbox experts.